How It All Began

Our story began about 5 years ago, Shawn has always loved a drop of real cider none of the cheap blended ciders! We often used to say, one day we will make our own.

Having moved house and taken on a large restoration project sixteen years ago, to say that we already had enough on our plate would have been an understatement. However after purchasing Pipewell Hall near Kettering (Bad Boy HQ) and after several years working to get the Hall into a more habitable state, we decided one Sunday afternoon to pick the apples from the old orchard that we have here in the grounds of Pipewell Hall.

Starting with a very small cider press we made our own apple juice for friends and family.

After bottling the apple juice we gave a lot away, having consumed too much ourselves! We then discovered some time later by mistake, that some of the unopened bottles had started to ferment and by a pure mistake we had in fact produced our very first bottle of cider – which was delicious! We decided to pasteurise the next batch to make it last longer, and still some of these hadn’t pasteurised properly and had already started fermenting in the bottles again. At this point we took this as a sign that we were destined to make some real single variety cider. The following batches just got better and better!

In this lightbulb moment Bad Boy Cider was born.

Shawn’s next step was to book himself on a cider making course to learn as much as he could about the cider making process. We then purchased our first batch of Dabinetts direct from Herefordshire and processed around 4 tonnes of apples! Which we packed into 20 litre bag-in-boxes and distributed to the wholesale trade. Reports soon came back “how soon can we get some more?!”

Our aim was to produce a typical Hereford/ West Country good quality scrumpy style cider using natural ingredients and as much pure juice as possible. We are now accepted and have received our stamp as a 90% juice producer from the Small Independent Cider Association (SICA) for our Bad Boy original.

As well as the ongoing restoration of the Hall, Shawn was also making sausages and smoking meat as a favourite pastime. Shawn comes from a 7th generation of farmers and butchers so meat has always been very much a part of his life and when you are passionate about things you love, the magic really starts to happen. What could be more enjoyable than to be eating your own sausages washed down with a pint of your own cider! We now not only have a cider business but also a street food business we named Bad Boy BBQ selling our sausages and smoked meats, along with a converted shepherds hut which has become our Bad Boy mobile bar. You can find us across many parts of the country from Rutland to Brighton!

The sausage business was originally named Bakers Bangers (our surname is Baker) and we designed our logo with the initials BB and incorporated the pigs to represent the meat side. Shawn wanted to name the cider Butchers Boy but unfortunately the name was already taken and we wanted to keep the logo the same for the two businesses so we needed to come up with another suitable name. I came up with the name of Bad Boy as to me Shawn has always been the original Bad Boy, always the life and soul of any party, to driving tanks or inappropriate fancy dress (but that’s another story, perhaps one he might tell you over a pint of cider or two!). 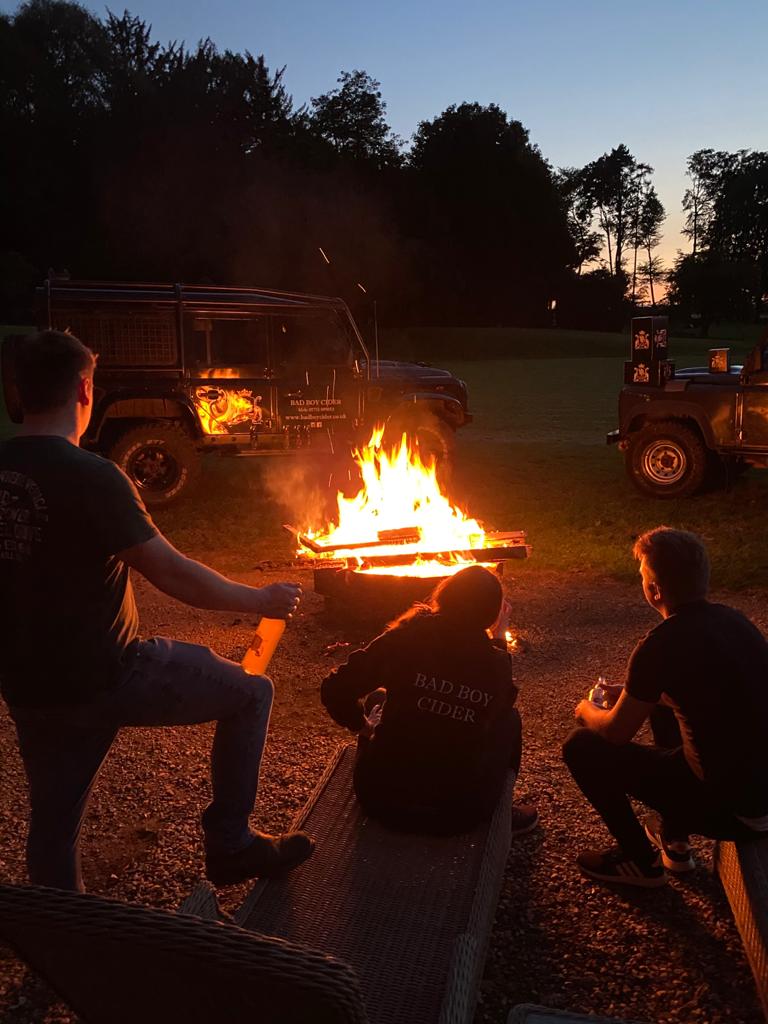 FREE DELIVERY on all orders, excluding Highlands and islands. More info or Dismiss